Ok so yesterday's post was pretty lame. I'll admit it. I didn't have anything to share and was a bit tired to yammer on. Anyway I think I'll make up for it today =) I love productive days. Can't share everything since a few things I worked on are for a personal swap with an awesome lady in England that does kick-ass screenprinting (check out her blog!) work as well but that'll come later.

Anyway, I made two more new drawings for my screens! Not the greatest picture admittedly. Whatever. A small insight to the constant mess that is my crafting area. And somehow I'm still able to work, hm. Anyway, here they are printed. 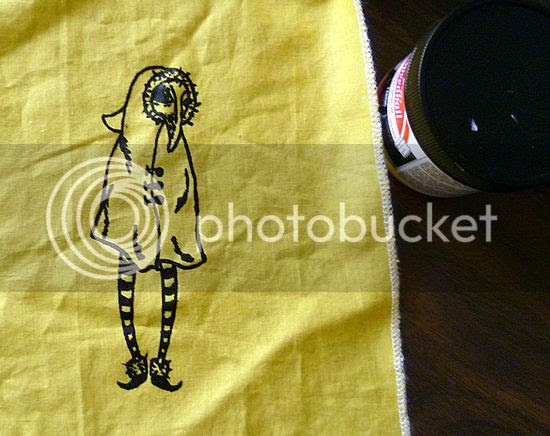 The first one is just a little creepy guy that was inspired by an awesome art doll I saw on etsy (well crap, now I can't find the link). I'm a little frustrated though that using the drawing fluid/screen filler isn't giving me incredibly fine lines...I think I'm using the smallest paint brush I own..maybe I'll have to search Joanns for a smaller one to see if that does the trick. I am tempted to get some photo emulsion junk to try out on my screens. I worry that it won't work properly since I'm not really using proper screenprinting mesh, but I think...it might work. I'll splurge when the spirit moves me.

Here he is when I tried to combine him with my face print. The registration sucks =/ I'm not quite sure what's going to happen to this piece. 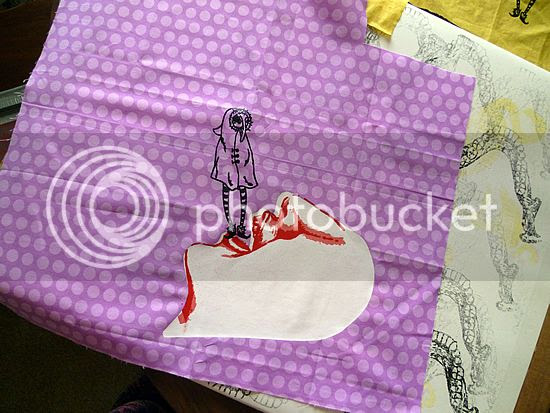 Anyway, here's the other print. 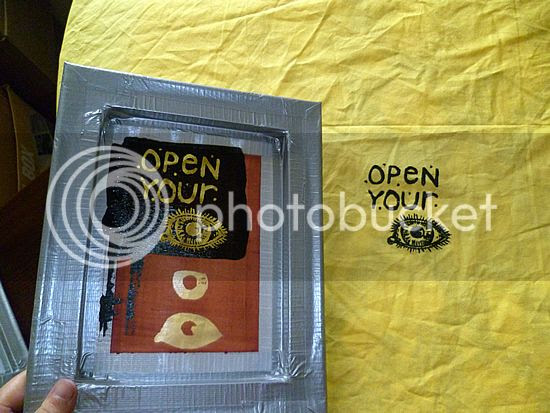 I'm pretty excited about this one =) I signed up for a swap on craftster where we will be making artwork to purposely abandon in public places, and since I've been so fixated on screenprinting lately I thought I'd incorporate that into my design. I also thought I was terribly clever and created all 3 layers of the eyeball on one screen. I. Am. A. Genius. hah. I will be making these into a sort of mini-fabric artwork that can be hung and abandoned.


Besides screenprinting (I'm sure you might appreciate the break) I finally got to work on a custom drawing I'm doing for my uncle who is a major bicycle enthusiast (for the time being I'm going to ignore the fact that he also requested some sort of "sculptural" art with a bike theme because I'm really not quite sure what I'm going to do about that yet...it should be an interesting challenge). He requested some sort of bicycle theme, which instantly frightened me because it sucks to have to draw all the fiddly bits of a bike and whatnot...so I decided to incorporate that with what I really enjoy which are fun portraits. I'm not the best drawer but I'm pretty happy with it so far. i took progress shots of it so far. Shading starting from the bottom up. 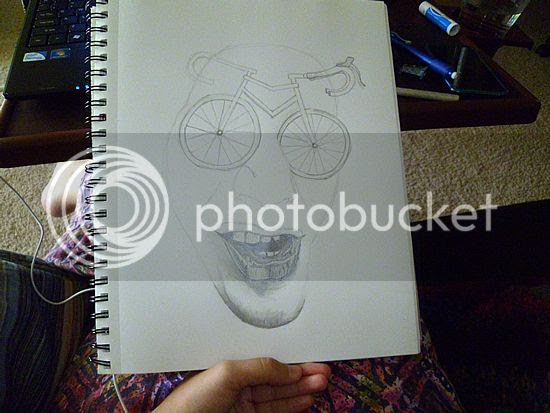 We have reached the nose now. 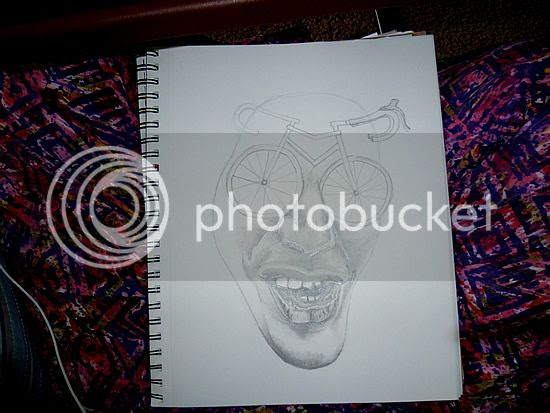 That's all I got so far. Obviously I've been kind of avoiding dealing with the bike itself, but I will bite that bullet at some point in the near future. I'm pleasantly surprised that having not really tried to draw something this in depth in many months I still have the knack.

Ok goals for this week:
1. Finish bike drawing
2. Work on/finish by the end of the weekend custom shop bag

Seriously that's it. I need to get these done!
Posted by QuirkieCraft at 6:13 PM