Remember that list I posted a few days ago? Well I've been somewhat successful at sticking to it....and a lot not as is usually the case.

Item 1: I did finish my stenciled shirt for the HP movie! I love Alan Rickman and omg his role in the last film is heartbreaking and awesome so I am glad I chose to feature him on my shirt. I'm not sure how I feel about the bright primary colors but in any case it is one of a kind and it stands out. I cut out the stencils but when I went to dig out a plain shirt in my closet I found that I only had long sleeved ones! Which would not do since it's been 90+ degrees outside this week. I know I get cold easily but even that would be too much for me. So I recycled one of my thrifted shirts that was kind of a rock and roll skull with rats and snakes on it....it felt pretty appropriate given that Death Eaters are all about the dark side and could be pretty rock and roll at times. 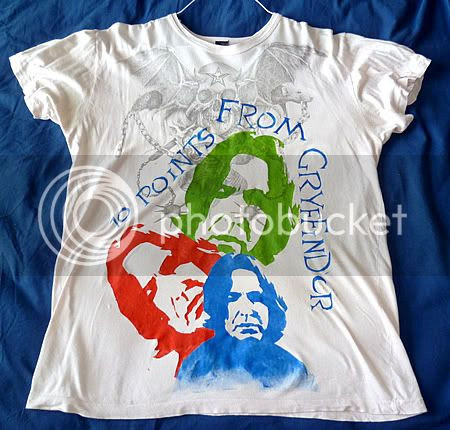 Another thing I was able to accomplish was a felt owl post hoop that I've been meaning to make for my dear friend Nicole for the longest time. I knew it wouldn't take long to put together but kept postponing it. But with my antsy anticipation of seeing the movie on Tuesday I had HP on the brain hardcore and was finally inspired to get it done. Of course I didn't realize I ran out of white felt for the clouds but I improvised with white fabric instead and I think it worked out ok. I haven't seen this on any other owl post hoops but I added a howler envelope too which I think gives it just the right pop of color, not to mention an additional story to the scene. I wonder whose getting that one? 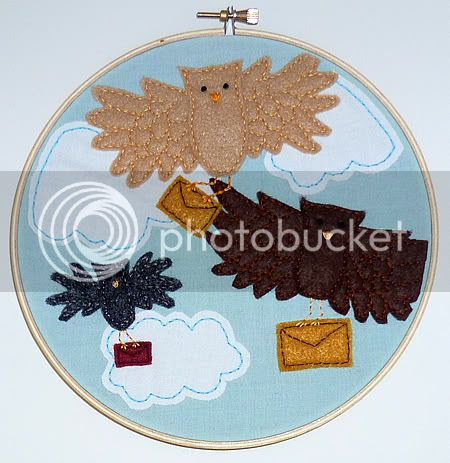 That's all the HP stuff for now. I have to admit that I've kind of abandoned my list for now since I've totally been inspired to start another HP inspired surprise for Nicole....it's one of those things that is just going to keep bugging me until I get it done. But I think she will love it and I'm going to have a ton of fun making it. I'll keep you guys posted on that progress and maybe sneak in some work-in progress pictures.
Posted by QuirkieCraft at 4:06 AM